I wrote recently about this superpower I possess called synesthesia. How I see letters and words in full color. And how I am going to defeat fear once I manage to harness my power properly.

It occurred to me this morning that my superpower might be the cause of quirky compulsions I also possess like the one that prevents me from listening to the Beach Boys in December, or drives me to listen to Van Morrison when the leaves start to change color and fall from the trees (even if I’m not living in the country in which they do.)

The connection between music and emotion is a studied one that’s not unique to me, but actually quite documented in human beings. But what about music and season? For me, the music must fit the weather outside. And there are singers or albums that are just completely inappropriate in winter, or off limits when I’m driving with the top down in July.

I looked into it a little. And guess what?

Studies show that music is connected to color and color is connected to emotion — particularly for people with synesthesia. From there, the connection is easy.  Emotion as it relates to season is a no-brainer. Lots of babies are born in August, nine months after couples snuggle up together inside supposedly to warm up from winter’s cold. I think it’s more than shelter from the cold they seek; but love and interpersonal connection that is often sacrificed in the isolation that winter brings.

Ask the average Joe or Jane which emotion is aroused when they envision summer. Most will say joy. Freedom. Fun. Ask the same person to describe the accompanying emotions to winter, Most will say introspection, introversion or sadness.

What about you? What do you say?

Having superpowers can make a girl feel lonely sometimes. Like I’m the only one whose heart hurts as fall moves towards winter. But when I get like that I cry it out to Randy Newman … whose voice and lyrics match perfectly the melancholy and nostalgia that crop up for me in fall.

Or I listen to this video — a performance of his “I Want You to Hurt Like I Do” in Berlin– and I laugh. Knowing I’m not really as alone as I think.

Lately, I find myself seduced by bugs.

On the one hand, they’re so, so ugly.

I don’t want them anywhere near me.

And yet, I can’t get close enough.

I want to examine them. Study their intricacies. See how they’re made. Gaze into their eyes.

I’m fascinated by their beauty. By the very clear and intentional design of their wings, their backs, their stingers.

Who made bugs so beautiful and so ugly at the same time?

I often ask myself the same question about religion:

Who made religion so beautiful and so ugly at the same time?

Who made it so I could find solace and comfort in prayer and community, while at the same time feel so ashamed at the behavior of  my community leaders and fellow members?

Who made religion so beautiful and so ugly at the same time?

Who made it so I could be so energized and enlightened by religious texts, and so confused and hurt by their antiquated, yet still upheld laws?

Who made it so beautiful?

At the same time?

And, perhaps the better question is why…

What purpose does this dichotomy serve? 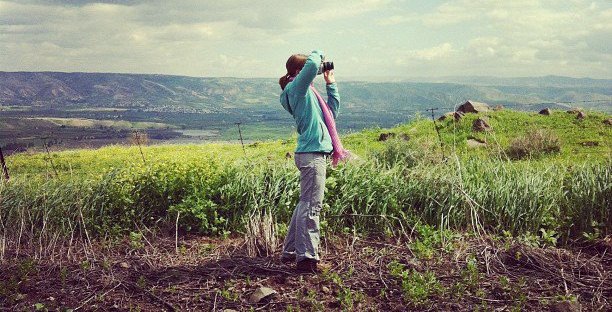 There’s a story I’ve shared quite a few times over the past six years since I became an accidental activist for holistic health and conscious living.

The story goes like this: I used to roll my eyes at environmentalists.

I used to snore that obnoxious snore that one inhales at the back of one’s throat when one thinks that someone else is holier than thou … naive … peace loving … do-gooding…world saving.

And then one day I became the person other people roll their eyes at.

After denying for years I was an earth loving, peace seeking hippie, I realized that all the efforts I had made to be healthy; to protect my kids from toxins in their food and surroundings; to connect people to wellness practitioners that allowed them to avoid a life spent on medication  — all those things — also helped the Earth.

And what did I understand soon after that?

If there was no Earth for my children to live on, it wouldn’t matter how organic, how natural, how toxin-free they were.

Not the kind of environmentalist that saves otters or spends two years in a treehouse in the Amazon.

One that reads food labels.

One that brings an extra plastic bag on a picnic for trash — and then feels a little guilty she has a plastic bag in her possession to begin with. 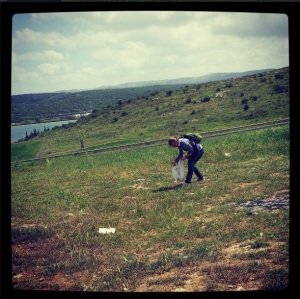 One that teaches her kids that killing ants is cruel and eating animals is something I wrestle with.

I find that many people think that being green means being totally and completely careful and sure about every single thing you do, eat, buy. As if going green means going whole hog, vegan, hemp-wearing, off-the-grid hippie.

My kids own plastic toys.

Sometimes I throw them in the trash.

Sometimes I pack the glass bottles up in bags with the intention of taking them over to the next community for recycling.

Weeks go by. I throw the glass bottles in the trash instead.

And sometimes I take them — in spite of the fact I live in a country where water is a luxury.

Sometimes I fantasize about kicking dogs. (I don’t kick them, but not because I like them).

I am human. But at the same time, I am a thinker.

I am someone who thinks green… by default, at first. And now, on purpose.

I think; therefore, I am.

I am someone who acts green.

Not because it’s politically correct or trendy.

And not because I think that my one or two or ten choices will mean that there will be a planet for my children to live on in 20 years.

In fact, some days I find myself banking on Mars.

Some days I think we’re all just f-ing doomed.

I am an environmentalist because once I started thinking, I realized it was impossible for me to be anything but…

Minor because I’ve never fully engaged in studying the skies above me; rather remained content to swim in the magical mystery of it all:

Scanning the skies for falling streaks of light

sprawled out on a blanket

Space is humbling. It’s a reminder of how much we have yet to discover.

And it’s awe-inspiring. When I allow myself to be swallowed up in space, I’ve suddenly accessed the wonder of a child.

Everything else slips away. Work. Mortgages. Car payments. Doctor’s appointments. The drama of the day-to-day.

It’s just me and space.

Since moving out to the countryside, far away from the city glare, I am no longer able to simply walk anywhere at night. I can only stroll, with my neck craning back, my eyes on countless stars, seeking understanding, succumbing to not.

I so easily get lost up there.

And so, for weeks I’ve been anticipating the transit of Venus.  Transits of Venus “occur in pairs with more than a century separating each pair.” As if the mysteries of our solar system and what lies beyond isn’t enough of a draw, the idea of witnessing something that won’t again appear in my lifetime — or sharing this experience with my children — is simply irresistible. (We’ve created an “eclipse” scope to view the event together at sunrise on June 6 in Israel.)

Venus last passed in between Earth and the sun on June 8, 2004. I missed it. I was too busy parenting a toddler in his terrible twos, building a career in freelance writing, making mommy friends, navigating the precarious curves and junctions of “married with a kid.”

So much has happened in my life in the eight years between when Venus last transited and today. But my milestones can easily be squashed when you consider what’s become of humanity since Venus’ slow march across the glare of the sun in 1882 — back in the days of Billy the Kid and the OK Corral. Before the Brooklyn Bridge was built. Before George Eastmen created the modern camera.  Before the moon landing. Before we glimpsed the Earth from above.

Before me. Before you.

And the mind can get lost in curiosity or despair when she imagines what might transpire between now and when Venus is scheduled for another transit  105 years from now.

After me. After you. After my children, too.

As I said, I’m a minor space geek — more a magician’s apprentice than student. Content mostly to revel in the experience of being puzzled without having to actually solve anything. Content to point out a planet to my son. Content to scan the skies for a shooting star with my daughter. Content to share a bottle of wine with my husband on a blanket in the middle of a field under the romance-inducing canopy that is the vast night sky.

And content to stand in my backyard as the sun rises on June 6 staring into a cardboard box, eyes wide open — a child among my children. Dazzled and bewildered by space. Content to swim in the magical mystery of it all.