The winner will only be announced at the end of the summer, but for now I’m pretty excited to join the high-caliber writers of nonfiction on the list of finalists for the Autumn House Press 2016 full-length book contest.

In our age of internet memes and sloganed t-shirts, it’s really easy to start throwing around a catchphrase without giving much thought to who coined it, let alone whether or not it’s actually true.

The most clicked-thru post on this blog is one in which I consider the phrase “life begins at 40,” questioning (without answering) whether or not Carl Jung actually said this. If Google searching is any indication, it seems people really want to know the answer: does life really begin at 40?

I don’t have the answer.

But the sentiment was reaffirmed at the Cherry Hill Public Library sale today, where I’ve spent the last two mornings old book diving. There, I found on the “Antiquarian” table this 1932 book by Journalism professor Walter B. Pitkin. I cracked it open in the hopes of getting to the bottom of the phrase. After all, an old book must be a little more reliable than a meme…right? 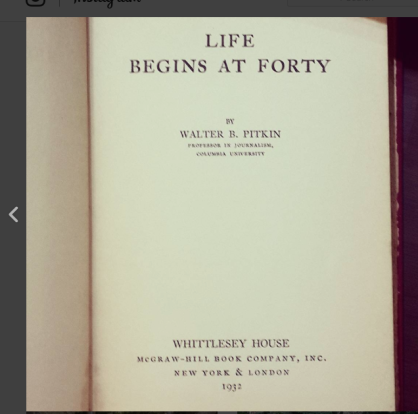 I leafed through the slightly water-stained, hardbound book, and then turned to the introductory chapter.

On a day when my sadness and despair for the fate of humanity has only deepened, in a month during which my confidence in a safe and equitable future for my children has only continued to wane, this book’s opening paragraph had such a positive tone, I couldn’t help but spend the $2 to buy it.

Did you know that at forty “work becomes easy and brief?” “Play grows richer and longer?” and “Leisure lengthens?” This is Pitkin’s claim, at least.

I haven’t read past the first few pages, so I am not sure I’m willing to give credence yet to Pitkin’s claim that life begins at 40. Work for me has not become easy. My play has not yet grown richer and longer. But Pitkin’s basic thesis is that we should be happy we’re not dead. And with this, I agree.

Along with Pitkin’s book, I also bought an Eckhart Tolle, Gretchen Rubin’s The Happiness Project and three books of poetry. When I walked out the door and looked at my stash this morning, I realized what I had done.

According to Wikipeda “Life Begins at Forty” was

Written during a time of rapid increase in life expectancy (at the time of its publication American life expectancy at birth was around 60 and climbing fast, from being only at age 40 fifty years before),[1] it was very popular and influential. It was the #1 bestselling non-fiction book in the United States in 1933, and #2 in 1934,[2] according to Publishers Weekly.

Wikipedia concludes by saying that the “general thrust of the book is that given the current conditions of the world, one could look forward to many years of fulfilling and happy existence after age 40, provided that one maintained the proper positive attitude.”

Strange considering when Pitkin wrote his book, the U.S. was facing a devastating economic depression, and countries around the world were immersed in their own domestic upheavals. That a book suggesting to 1932’s struggling, poor 40 year olds that they were “the luckiest generation ever”  wasn’t collectively thrown into the trash can fires in the street, it pretty incredible. And on the contrary, the book was a #1 bestseller!

Given the current conditions of our own world, I am constantly terrified of not being able to look forward to anything let alone a fulfilling, happy existence after 40. But when all else fails…you know what I do? I buy books. Especially ones that may help me feel better, even temporarily. For me, I usually serve myself up a portion of nonfiction positive attitude, law of attraction, pseudo Buddhist philosophy. For you, the salve may be crime fiction or cookbooks. (All available at the Cherry Hill Public Library sale!)

According to an unattributed internet meme, Theodore Roosevelt once said the “more you know about the past the better prepared you are for the future.”  As someone who has spent much money and much time trying to be less “prepared for the future” (aka lose my commitment to the irrational beliefs caused by my lifelong generalized anxiety disorder) I will suggest that the future of our world may look grim, may indeed be grim, but one thing we can and should do is, as Pitkin writes, try not to grow “disconsolate, embittered and hard.”

Even in these very grim times.

Instead, buy books. (And read them.)

I so enjoyed Little Labors, the latest book out from award-winning novelist Rivka Galchen. A stunning, intimate, but thoughtful hybrid work, Little Labors is definitely a recommended read for this summer.

Check out my review and interview with Galchen, up on The Times of Israel today.

It’s more than half a year since I started writing the bimonthly creative nonfiction column, “My Time, Your Place” on District Lit.

If you have the chance today, please check out my latest entry “Second-Person Point of View.” (If you were a Choose Your Own Adventure enthusiast, you might especially enjoy it.)

There was an error retrieving images from Instagram. An attempt will be remade in a few minutes.