Nowhere in his song “Thank God I’m A Country Boy” does John Denver mention anything about lizards. Or snakes. Or centipedes.

I’ll take the laid back life on the farm that Denver croons about any day of the week, but the truth of the matter is: I’m a suburban girl. And worse yet, I’m a born and raised Jersey girl.

Sure, I went to overnight camp in the woods of Pennsylvania and Maine. Sure, I camped out a few times as a young adult — happy to be cozy in sleeping bags with boys I had crushes on. But, I’ve never been the rough and tumble kind of girl who has embraced nature.

I blame this on allergies.

Since I had severe environmental allergies as a kid, and was literally allergic to everything on the scratch test, I was pretty uncomfortable out in nature. From the expected stuffy nose and watery eyes, to the unexpected over-reaction to poison ivy and mosquito bites. (Ask my USY friends if they remember an epic case of oozing poison ivy I was quarantined for one Spring Convention.)

Nature was never as kind to me as I was to her. Despite a run-of-the-mill fear of spiders and other insects, I’ve never been the sort who killed a critter with pleasure. Whenever possible, if a rogue bug makes it indoors, I either scoop it up into a glass and let it go outside, or I ask my husband to “take care of it.” The exception to this is cockroaches (I had an infestation in one city apartment) and mice (another infestation in a different city apartment) — those guys I kill with pleasure. After all, it’s not as if my exterminating a few is going to make any significant impact on their population density. Mice and roaches will survive 2012, if anyone will.

Here in Israel, as I’ve mentioned before, I’ve had to get used to sharing my home with the outdoors. This includes the mud my kids track in on a daily basis, the dust that flies in through open windows, and the creatures that make their way through cracks or doors left open by mud-stained children. A Daddy Long Legs has been hanging out in the same spot on my bathroom ceiling for three months now. He hasn’t moved. For a while, I used to check above my head while I was showering or on the toilet to make sure he wasn’t creeping down closer to me. At some point, I realized he was either dead or very comfortable in his spot on the ceiling, and I started greeting him with a smile in the mornings instead of worrying about him.

Lest you think I have made the transition to country life with ease, let me burst that bubble for you. Earlier this week, I went into my bathroom and closed the door. I sat down on the toilet and looked up at the ceiling to greet my long-legged friend. He wasn’t there. He was gone. But someone took his place.

This guy (or a close relative): 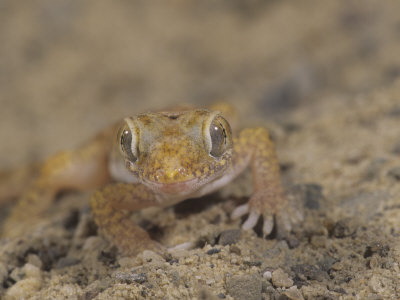 A lizard. About 6 inches long. Hanging on the wall above the bathroom door.

I had seen this guy before. A few nights prior, we heard some crickets behind the refrigerator door. Determined to quiet the noise, we pulled the refrigerator out from the wall to take care of it once and for all. We didn’t find crickets. We found a lizard.

Compassion, karma, fear of retribution…call it what you will, but there was no way I was letting my husband kill a lizard in my house. Standing on a chair and screaming like an old lady the entire time, I made him chase the lizard down until he caught it inside a glass and released it outside.

This time we were not so lucky. I called for my husband who went after the lizard in the bathroom in the same fashion. But this time, the little guy got away. He scurried under the bathroom door and hid — In the laundry basket? Behind the wardrobe? Under the bed? Who knows.

I didn’t sleep so well that night. I woke up constantly; peeking above my head to the bedroom ceiling, waiting for the other lizard to drop. To my knowledge, he didn’t. And he’s stayed in hiding since.

My mother-in-law says I should leave the lizards alone. “They eat the bugs,” she says. She makes a good point.

Next up, I’ll be instructed to ignore the snakes.  After all, they eat lizards.

3 thoughts on “That’s So Country”