It’s not difficult to spot us.

Those of us in love with old books.

We have shelves full of them.

We smuggle them into our homes despite the eye rolling of our spouses, our parents, our roommates.

We tolerate repetitive sneezing due to dust and the mildew and the ancient tree pollen lurking beneath pages 204 and 205 of the worn book of poetry; for the last time it was opened was beneath an olive tree in the rain.

We can be spotted inside libraries caressing the faded red jacket cover of a 1930s edition of Alice in Wonderland, both in awe that this edition is in our hands and moved by the many hands it has passed through.

Hands now wrinkled, hands now dead and buried, hands that have held wonders of their own in the years since they last held Alice’s. 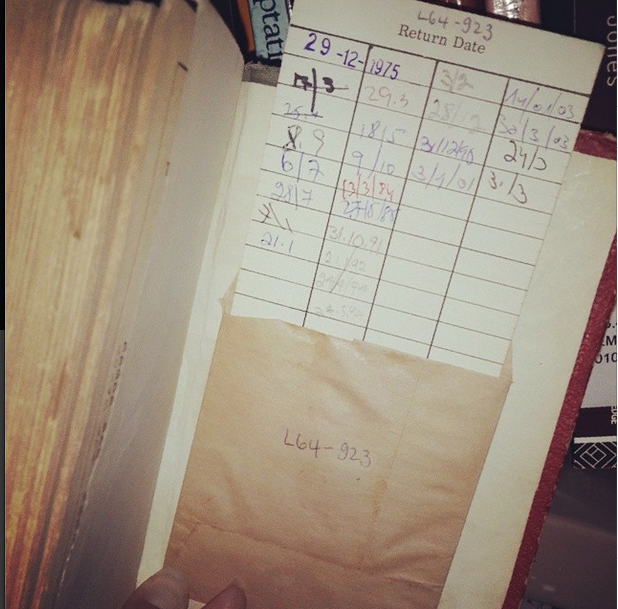 We weep at inscriptions:

To my beloved wife on our 5th wedding anniversary

We rescue old books from the recycling plant or, worse yet, from the dump.

We hold on to them in case of the apocalypse or hand them over to crafty friends to offer them a secondhand chance at life as a kitschy framed work of art for sale on etsy or as an IPAD cover, a final project for graphic design school.

Sometimes you hear us sighing in a used book store.

Sometimes we get lost in a used bookstore.

Sometimes we get caught longing for a used book store. Someone asks us, “What were you thinking about just then?” And we answer, “I was looking at your canvas tote bag from The Strand and wishing I was there right now.”

Truth be told: If I could be anywhere right now, I would be inside a used book store.

I would be sneezing my brains out. I would desperately need to use the bathroom (book stores have done this to me since I was 7.) I would lose track of time and part with lots of money, but this is where I would choose to be on any given day.

Even on a beach day.

I suppose TV had a hand in this, what with Charmed and Buffy and farther back even still, Friday the 13th The Series.

I suppose that movies had a hand in this, what with The Neverending Story and The Ninth Gate.

I suppose books themselves have had a hand in this, too. By becoming old. By becoming rare. By becoming obsolete in a way. By carrying in their spines the secrets of a thousand and one human beings.

I don’t know why, exactly, I have such a strong affection for old books, but I imagine it’s wrapped in my curious regard for the passing of time.

It’s a way to touch the past.

It’s a way to relate to people who I will never have the chance to speak to or behold.

It’s time travel of a sort. It is. Stop saying it isn’t.

Old books make me weep for the people who once read them.

For the person who will read it after me. Whom, I hope, might weep for me, too.

Might remember me, the ghost of me … with fondness.

For, despite the space and time between us, we both once turned this book over; swiped the top corner with a damp pointer finger; placed it spread open wide on a night stand or flat sandwiching a clean white tissue inside.

But between us, there are books.

14 thoughts on “Between us, there are books”