Yesterday I took my husband to the ER for symptoms he has been suffering for over a week. Fortunately he was released at the end of a very long day and evening with a diagnosis of pneumonia. Serious, but not as serious as we thought, and treatable with antibiotics. And so … relief.

We both hate the hospital. I suppose most people do. Worse than the fear of germs for me, though, is the overwhelm I experience in the middle of all that humanity.

As much as my sensitivity allows me to understand and connect deeply to people, it also is able to submerge me beneath a deluge of compassion.

I may drown there.

Through an invisible intravenous line, they enter me.

For a while there in curtained off section #17, I wrote poems and jotted down notes for story ideas. Tried to read a few pages of the book I brought with me. Scrolled social media for updates on the three kidnapped boys. Then my husband told me to leave.

“Go get lunch,” he said. But he meant, “Leave here since you are able.”

In fact, I have never walked around Haifa for fun. Even though I live only a short drive away, I end up in Israel’s city by the bay for appointments or by surprise. And not the kind of surprise you look forward to.

I’ve never explored Haifa even though the views are known to be incredible.

Without much hesitation, I did as my husband instructed. I knew I could use some fresh air, especially since an orderly had just rolled in a new elderly patient who looked as if she was on her way to meet the Maker.

I walked down quiet Smolenskin Street where I had parked the car, past old-school Israeli apartment buildings, some with beautiful gardens.

and momentarily felt uplifted. I traveled by foot up to Horev Street where I got an hafooch and a cheese croissant at Roladin. I hadn’t had much of an appetite all day. I think the worry finally hit my belly.

I wandered in and out of a few shops, met a Tarot teacher, spotted a Tibetan bowl I liked (hint hint: possibly a birthday present for me!), discovered the Rabbi Yosef Dana steps

And, most unexpectedly, stumbled upon a small shop inside a mall on the corner of Horev and Gat, a small corner of which was stocked with used books. A whole shelf full of English titles! From Umberto Eco to VC Andrews. 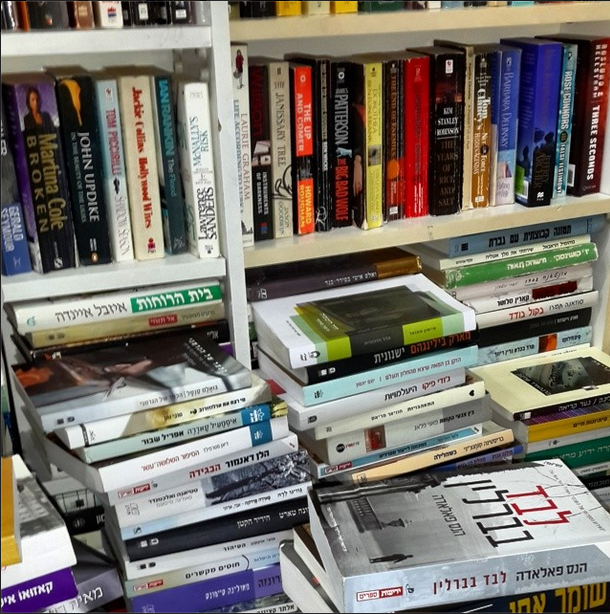 I was in the middle of debating whether or not to buy Paul Auster’s Oracle Night when my husband called asking me to return to the hospital. I quickly paid for the book based solely on the jacket cover copy and the title (I’m a sucker that way for marketing). Only when I got back to his bedside did I read the first line of the book in a bit of astonishment:

“I had been sick for a long time. When the day came for me to leave the hospital, I barely knew how to walk anymore.”

It stopped me. Compelled me to look over at my husband with a bit of concern. I’m susceptible to coincidence that way in the same way I’m sensitive to the swarm of human emotions.

What I meant was: Sometimes if it looks like it’s going to be okay, it actually is.  No matter what upset is happening inside the region of your heart.

My husband further allayed my concerns by sitting up and chatting a bit with a me for the first time in a week.

When the doctor came by with a diagnosis (not as severe as we feared) and with a release form to leave the ER, I turned with relief to my husband and smirked, “Thanks, hun. That was the best date I’ve been on in a long time.”  My husband gave me a half smile. He knew what I meant. He’s sensitive that way.