Among my cardboard boxes, there is another. It’s plastic. A clear Tupperware container with a blue cover marked “Jen’s papers.”

I laugh a little at this because the markings on the masking tape are in my mother’s handwriting and I would have expected it to read “Jennifer’s papers.”

I opened this container a few months ago when the shipment arrived, and was first struck sick by the smell, a strong combination of mildew and 30-year-old paste.

I quickly secured the top back on  (imagining my own ironic, horrible scifi death by spores) and put it back on the pile of boxes for later review.

A bit heartbroken, I intended to throw the whole thing away. Clearly the papers inside were ruined; forgotten leftovers stored too long. But before I got rid of all of it I wanted to document the contents.  After all, my mother took care to fill this container over the course of a decade and to rescue it — not once, but many times — from basement catastrophe (flood, hurricane, divorce).

Despite potential ruin, after all these years, the Tupperware reached its destination: in the hands of grown-up Me. It would be a shame not to unload its cargo. Also, and most important, as a mother who hoards, I know well the affection wrapped up in the saving of those papers.

I approached the container again this week, when I had a few hours to myself during the day and when the weather was mild enough to be able to go through them in fresher air outside.

I took out our good camera and prepared to archive my findings.

I knew that most of what I’d find would be handwriting exercises, A+ papers, and art projects. Nothing extraordinary, I imagined, would be discovered inside. What could I possibly have produced in elementary school that would elicit any deeper emotions than sentimentality? On the other hand, my boxes  constantly surprise me and this one was no different.

Between me and Mrs. Aducat.

Mrs. Aducat, who wasn’t even my homeroom teacher, not even the woman I spent most of my day with in first grade, but simply my reading teacher. The woman who taught me language, sentence construction, how to express myself with carefully crafted words.

Based on the persistence with which I sought her love, my affection was strong. 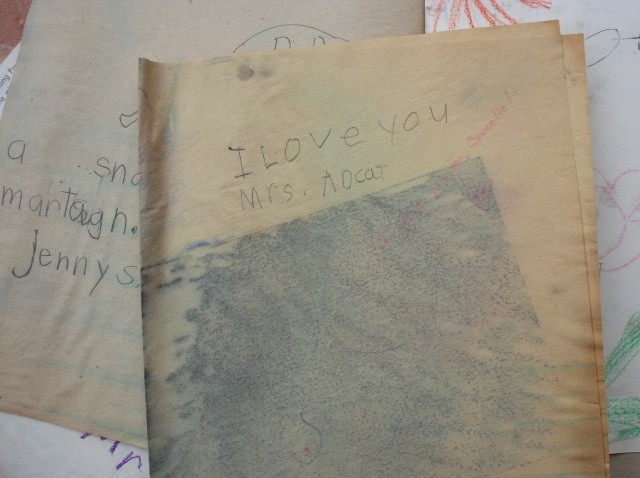 Over the course of months, I wrote many love notes to Mrs. Aducat on the back of my writing exercises.

And she wrote me back.

“I love you, too, sweetie,” she wrote in red cursive on the back of one.

And with a smiling heart on another.

“Yes!” she answered me with an exclamation point one time when I asked her if she loved me too.

I even made it simple for her once. YES or NO, I wrote under two boxes. An ultimatum, perhaps?  If so, she took the bait and checked off YES. “Lots and lots,” she wrote underneath it in her red pen.

I am struck by this.

I am struck by the love given me by a grownup; not a relative, just a woman paid to teach me to read.

And I am struck by the unrestrained expression and bold audacity with which I expressed my love for her and asked for it in return.

Oh, to love and be loved again — unabashedly, without reserve — as I did, and was, when I was seven.

This is one in a series of essays inspired by my cardboard boxes. If you like this post, and want to know how it began, read A Case for Hoarding. One post in the series, “Note to Self,” was recently featured on Freshly Pressed. Additional posts are tagged “the boxed set series“.